What is Adblue and how does it work? 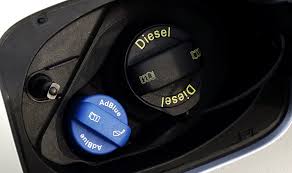 How does AdBlue work – and does my car have it?

AdBlue reduces harmful emissions – but if you run out, your car won’t start!

Many new diesel cars use a fluid called AdBlue, also known as Diesel Exhaust Fluid or DEF, to help reduce harmful exhaust emissions. It’s an exhaust additive, kept in its own special tank and injected automatically in small quantities into the flow of exhaust gas.

With diesel demand down but still accounting for more than a third of new car sales, the number of cars relying on AdBlue technology is going to increase rapidly over the next few years.

Most diesel drivers will need to top up the AdBlue at least once between services, so it’s important to keep an eye on dashboard warnings, particularly if you’re a high mileage motorist.

AdBlue is an exhaust fluid – not a fuel additive – and is stored in a separate reservoir topped up via a (usually) blue filler cap located either next to your fuel filler, in the boot or under the bonnet.

It’s a trade name registered by the German car manufacturers association, but is the most recognised form of Diesel Exhaust Fluid (DEF).

What is AdBlue made of?

AdBlue is a colourless, non-toxic mixture of urea and de-ionised water. It’s not actually blue at all.

Lots of people think AdBlue is made of pig urine – it’s not. The urea used in AdBlue is a high purity man-made solution – pig urine wouldn’t be pure or sterile enough for a commercial product.

How does AdBlue work?

Tiny amounts of AdBlue are injected into the flow of exhaust gases. At high temperatures AdBlue turns to ammonia and carbon dioxide. Inside the SCR (Selective Catalytic Reduction) catalyst, harmful nitrogen oxide in the exhaust reacts with the ammonia and is transformed to harmless nitrogen and water.

Similar technology has been used effectively for years in buses and heavy lorries.

What happens if I run out of AdBlue?

If you run out of AdBlue while you’re driving, then the engine’s power and performance will be reduced to limit its emissions. Once you’ve stopped, you won’t be able to restart the engine if the AdBlue tank’s empty.

The car will give you plenty of warning that the AdBlue tank’s running low – usually a text warning on the dashboard with around 1500 miles to go followed by an amber warning light.

Which cars can use AdBlue?

Not all car manufacturers use AdBlue technology. But chances are if you’ve got a diesel from Jaguar, Land Rover or any French or German manufacturer, and it was registered new after September 2015, it’ll use AdBlue.

Does my car use AdBlue?

Some older cars or vehicles from other manufacturers use AdBlue too, so if you’re not sure if your car uses it, you can check:

•The vehicle handbook.
•See if there’s an AdBlue filler cap either next to the fuel filler, in the boot or under the bonnet.
•If the model name contains ‘Blue’ or ‘SCR’.
•If you’re still not sure, ask a dealer.

Where can I buy AdBlue?

AdBlue’s sold by petrol stations, garages, motor accessory shops, online retailers and even some supermarkets. If you’re in any doubt that you’re buying the right stuff, contact your dealer.

It’s widely available in 1.5, 5 and 10 litre containers. The smaller packs have a specially-designed neck which allows you to top up the tank without a funnel but without risk of spillage, so why not carry a small container of AdBlue so you’re ready to top-up when necessary?

How long does AdBlue last?

The rate at which you use AdBlue depends on your engine and how economically you drive.

Typical consumption seems to be around a litre of AdBlue every 600 miles but could be as high as a litre every 350 miles. The size of the tank varies too so the range between refills could be somewhere between 3,000 and 12,000 miles depending on the car and your driving style.

This means that most drivers will have to top-up their AdBlue reservoir at least once between normal service visits to the dealer.

Is it safe to drive with the AdBlue warning light on?

It’s not a major safety issue, but if you don’t top up, you’ll eventually run out of AdBlue and you won’t be able to start the car.

When the warning light first comes on you’ll have plenty of time to refill – so don’t panic. Just make sure you don’t put off topping up.

How to reset the AdBlue warning light

There’s no manual way of resetting your AdBlue warning light – the only thing you can do is top up. Once you’ve refilled to the minimum level, the warning light will disappear.

Where is the AdBlue tank?

The AdBlue tank is usually located under the boot floor, where the spare wheel might have been in the past, but it’s more important to know where the filler for it is located. There’ll usually be a small blue filler cap next to the main diesel filler. If it’s not there, then check in the boot or under the bonnet.

What happens if I put AdBlue in the diesel tank?

Putting it directly into your fuel tank could cause expensive damage to your fuel tank, pump and injection system. If you start the engine it’s likely to be an expensive repair, so don’t touch the ignition.
You’ll need to get the tank drained and the contents disposed of safely before you can refill it. Call us on 07554851721 and we’ll sort the problem out.

What happens if I put diesel in the AdBlue tank?

Don’t turn on the ignition or start the engine and call us for help on 07554851721. If you do start your engine, then the damage could mean that you have to get the entire Selective Catalytic Reduction and AdBlue injection system replaced.

How do I refill the AdBlue tank?

Follow any instructions given in your handbook or on the pack.
Your handbook will tell you how much AdBlue the tank holds.
5 litres should be enough to make sure your car will restart if you’ve run out completely.
You may need a funnel depending on where the AdBlue filler cap is located – next to the fuel filler, in the boot, or under the bonnet – and the size/design of the AdBlue pack you’ve got.
Wash your hands and rinse any spills from the bodywork – AdBlue’s non-toxic but can cause irritation to your skin and eyes and will damage the paintwork.

How does AdBlue reduce exhaust emissions?

AdBlue is added to your exhaust and is mixed with the fumes your car produces – it reacts with nitrogen oxide gas (NOx gas) created by your engine and breaks it down into harmless nitrogen and water vapour. NOx gases cause respiratory problems and contribute to the formation of particulate matter, smog, acid rain and ground level ozone.

Most cars can only meet the Euro 6 standard when fitted with emissions technology known as Selective Catalytic Reduction (SCR). This technology uses AdBlue to break down and reduce harmful emissions.