Diesel into a Petrol car

It’s less common to put diesel in a petrol car due to the size difference in the fuel station nozzle and the vehicles filler neck. Diesel nozzles are much larger than the petrol cars filler neck which makes it difficult (but not impossible) to misfuel.

Around 10% of our callouts involve diesel being put in a petrol car, but this IS on the rise as more people are reverting back to petrol vehicles.

Don’t worry though, although a petrol vehicle can be a little more challenging to get going again, our specialist equipment and years of experience make this a simple task which can be carried out within 30 minutes of arriving at your vehicle!

This customer had filled up her petrol Volkswagen Polo with diesel in Neston and managed to drive it to Premier Plants in Ledsham not realising her mistake she carried on her journey which ended with the car rattling and smoking. Her first call was to her breakdown company as she was still unaware of what she had done, after the breakdown technician arrived and confirmed it was the wrong fuel she gave us a call to get the car sorted. We were on scene within 30 minutes and charged her £145 which included 10 litres of petrol to get the vehicle running again and allow her to carry on her journey.

After draining the tank, we removed the spark plugs and gave them a clean as they get fouled by the oily diesel. We then proceeded to flush out the fuel system and had the car running within 30 minutes.

So if you’ve put the wrong fuel in your vehicle in or around Ledsham, Wirral give us a call for an immediate response and hassle free repair on 01513742421 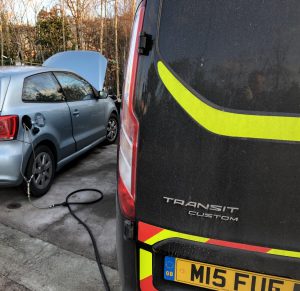